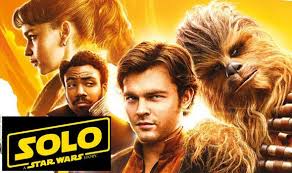 This year there has been a lot of commotion about Star Wars. With last December’s The Last Jedi leaving audiences divided on whether the movie was good or not, people are starting to get a bad feeling about this. Just last week, for the first time in Star Wars History, one of the main characters of the original trilogy, Han, got his own Solo film. Solo: A Star Wars Story tells us the origins of Han Solo. In the movie, we learn how Han meets his best friend Chewbaca the Wookie, how he gets the Millennium Falcon from Lando Calrissian, and how the Milennium Falcon was able to make the Kessel Run in less than twelve parsecs. The movie has actors Alden Ehrenreich as Han Solo, Donald Glover as Lando Calrissian, Emilia Clarke as Kira, and other major actors such as Woody Harrelson and Ray Park. The movie was directed by Ron Howard.

While the movie isn’t the best of the Star Wars movies, it isn’t one of the worst. One problem with the movie, is even though they explain what’s happening, it still feels empty. Like there’s still something missing, and it feels there isn’t any real turning points that happen. The story feels unfinished, even though it explains everything. Just like A.O Scott said from The New York Times it feels like, ” a curiously low-stakes blockbuster, in effect a filmed Wikipedia page.” Rotten Tomatoes gave the movie 71%, and movie goers gave it 63%. Now some Star Wars fans are boycotting Star Wars movies because of Disney making the previous Star Wars movie, The Last Jedi, terrible for the bad decisions they made. Now besides that, Solo got a Box Office Total of $115,168,465 as of May 30, 2018. While this is still a lot of money, it’s insignificant in comparison to other Star Wars movies (such as The Force Awakens), that made up to Two Billion Dollars. This shows us how the new Star Wars spinoff movies aren’t really having a good start so far. Rogue One was great, but Solo feels like a quick movie that you’ll watch once and never watch multiple times. The movie doesn’t feel like a classic, but more like a quick story so you know Han Solo in the other movies better.
Even though there are some problems, there are also some good things in it too. While it’s nearly impossible to mirror Harrison Ford’s personality, Alden Ehrenreich did a great job portraying a young Han Solo. The initial idea of how Han meets Chewbaca is both interesting and memorable. The action in the movie is done very well, the locations look amazing (like always), the music is good, and the actors all do a great job. Donald Glover as Lando Calrissian is possibly one of the best ideas ever in a Star Wars movie. He does an amazing job as young Lando. The movie isn’t really meant to be watched multiple times like other Star Wars films, even though it has its memorable scenes, it’s more like a “B” Popcorn Movie. On a scale from 1-10, I give this movie a solid 8.

You are joining the Dark Side… of spoilers. If you have a bad feeling about this, and don’t want the movie to be spoiled, do not read this part.

At the end of the movie we are given a special cameo by one of the greatest Star Wars villains of all time. His reappearance brings so many questions to the Star Wars mythos. In Solo: A Star Wars Story, the Dark Side Sith Lord, basically risen from the dead, once the apprentice of Darth Sidious (Emperor Palpatine), the character Darth Maul returns. In the movie, there is a plot-twist at the end in which one of the main protagonists, Kira, reveals that her new crime organization is under the control of Darth Maul, she also reveals that he has been secretly running the operation that is the focus of the movie. Darth Maul just like in the Phantom Menace, is played once again by Rey Park. We see Darth Maul as a hologram, and he has new robotic legs, for in the Phantom Menace, he gets cut in half by Obi-Won Kenobi. While it is cool to see Darth Maul return to the big screen, some questions arise. Like, didn’t he get cut in half and thrown down a pit, how could he possibly survive? Well, in multiple comics and TV shows, they explain that Darth Maul did survive. One of the best examples is the TV Shows Star Wars: The Clone Wars, and Star Wars: Rebels. In these shows, they show Maul’s life continuing after being defeated by Kenobi. At first, Maul seeks revenge against Kenobi for what he did to him, then starts a crime underworld empire, which was stopped by Darth Sidious himself. Now, all of these shows are in fact Canon, (meaning they actually do happen in Star Wars History). Darth Maul’s fate is sealed in Rebels, but I will not spoil what happens. Since Solo takes place before Rebels, Darth Maul returning seems like it could happen, but it still surprising to see. The return of Darth Maul to the big screen, was one of the most interesting parts of Solo: A Star Wars Story.