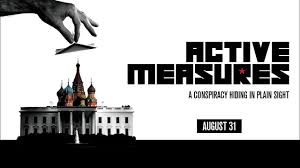 Blackmail, shell companies, money laundering, sex tapes, the KGB, dead journalists, and bombings, the documentary “Active Measures” makes sense of the web of events that have led to our current political scene.

Each moment watching “Active Measures” is like an action movie. Facts and statistics shoot out like bullets, and, before you have time to fully comprehend each piece of incriminating evidence, a new fact starts the cycle again.

This movie takes a hard look into Russia and their ties to Donald Trump by checking the pocket books of Russian crime bosses. At the heart of the film, “Active Measures” accuses Donald Trump of using his multi-million dollar apartments to launder money to crime bosses.

If half of what they say is true in this movie, Donald Trump could be labeled treasonous. Watch this movie and become an informed voter; join the conversation.