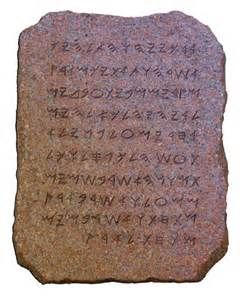 In the beginning, the world was green and full of life. But corrupt souls, with twisted ambitions, sought power and in so set the world ablaze, in the fires of war. Their fights led to the coming of mortem, the god of balance. Mortem, seeing how the world was ravaged, punished all living souls for eternity, in order to ensure the security and prosperity of the universe. But the lord is not without mercy. The lord will allow us to try once more, but only if we prevent the same errors again.  Now the world has started over, but the spark of chaos flies through the skies like wildfire. Cities are built and destroyed in a day, and order has been scattered. As if you broke a ceramic vase on the ground, and the new rulers pick up whatever they can get and built their empires.  Now the world is on course to fix their mistakes, but the entity of destruction must be held back. It must be tamed, or we will all die again. – The Tablets of Ram.
——————–

A man wakes up from his bed, and he is not happy, nor is he sad. The man knew this day would come, but whatever he tried, it never worked. Trying to fix the situation diplomatically, is and never will be the solution now. Not anymore. Even though he had absolute power in his part of the Ruin Plains, what did that matter to the Invaders at the Gates. The Invaders who had already slaughtered the villagers and towns behind those giant steel Gates. Sure, he could’ve done something. He could’ve gotten up when he heard the first screams then instead of going back to bed, but what did that matter? Their victory is inevitable.

The man got out of his large wooden carved bed, stuffed with piles of blankets soft as the clouds themselves. He then realized he would’ve slept better on a rigid rock in the middle of the desert, for he knew the guilt would not consume him there. The man decided, even though it wasn’t necessary, got dressed in his eloquent robes. The robes that one day brought happiness to him, his family, and people. Now the robes are just a hollow shell of a pervious life and wearing them would not bring back the memories. The man sat on his Diamond Throne by the Balcony, thinking. Not thinking about a plan to stop these Invaders, no, just thinking.

The man remembered his parents, who loved him unconditionally, and were proud to see him as the next successor of the throne. The man then remembered the day that turned an innocent childhood into a paranoid dynasty of chaos. This was the day when his Father told him about the Forbidden Texts and The Tablets of Ram. Sure, it sounded sacred and marvelous at first, but not when he realized what it all meant. It was disgusting to think this luxury is allowed after such devastation.

Meanwhile the Invaders, also known as the Zakazs, broke down the Gates and ambushed the City. They knew this suffering is terrible, but it was for the greater good. The fires of tyranny in this house must be extinguished forever. It was the only way to ensure mercy from Mortem. The leaders of the Zakazs, the Archers of the Last Khan, ordered all life must be destroyed, but only one thing must survive, The Tablets of Ram.

The Zakaz, wherever they went, brought fear. Besides also being fierce and cruel warriors, the Zakaz were monsters. After years of conquering with bloodshed, Mortem arrived and cursed them all. They were turned into Reptilian Beasts and were shunned from the outer world. The Zakaz decided to hide in the Waste Lands, tortured by their own guilt and identity. But then one day, Mortem returned. Mortem promised if the Zakaz would bring order to the world again in any way they can, they would be turned back into humans. Now the Zakaz are forming a World-Wide Empire, and this kingdom is the next stop.

The man then remembered his family. His lovely wife, who loved him no matter how insecure he was. And his Son, he loved him, even through death. The man remembered that heart-breaking dinner that night, when his Son, angered by the decisions made by the High Council, lashed out in fury. The Son said he hated his family, the kingdom, and all who live on this planet, for they bow to a god of no mercy and murder, and they expect peace. The Son rode off into the Plains, and he never came back later. His body was found scorched and boiling. The doctors assumed that this was the price to be paid for disobeying Mortem. While the man understood that, he couldn’t believe that such violence could be brought from one’s words, and the sight of his own frying son, changed him. His wife, who was devastated at the mere sight of her son, drank poison later that Spring. Now the man has nothing. No family, no heir, a kingdom doomed, and the world gone. He had only one importance, The Tablets of Ram and the Forbidden Texts.

Last winter, the man went to the Zakazs diplomatically, to prevent more violence. “If our lord and master want us to learn from our errors, why do we continue to kill”, he remembered saying? The Archers, hissing while they talked, answered. “Order must be brought to this chaotic world, and the wild must be tamed, whipped into submission if required. It is the only way to bring peace, through the death of the corrupt souls” the Archers said. The man remembered saying while leaving the ridiculous banter, “Then we all die”.

Meanwhile, the Invaders reached the Castle. The Zakaz were disgusted by such beautiful architecture, while the world outside of here decays. The General ordered the place to be destroyed, but only the Tablets must survive and be secured by them. The Zakaz understood, and they grabbed a rocket-launcher, and blew up the door.

Boom! The sound of the explosion echoed in the halls, despite there being panicking screams all around. The man heard this and was knocked breathless by the sound. He wasn’t scared, no, just surprised. They came quicker than he expected. Knowing that this day would come, the man decided on one probable solution, to ensure the progression of society into the future. The man sent out both The Tablets of Ram and the Forbidden Texts to unknown locations by two riders. These three only know where the key to the future is. The man knew these texts were important, and only the worthy should be allowed to understand their knowledge. The man went to the Balcony.

The Zakaz destroyed and killed every room and person in the Castle, while also looking for the Texts beforehand. The task, though simple, seemed very stressful and nerve-racking. Then they realized there was only one room left, The Throne Room. The Zakaz, out of rockets, grabbed a battering ram, and began to pound on the door.

Bang! Bang! Bang! That sound was different to the man this time, it sounded calmer. Calm in which, during those few seconds left, while thinking about his mistakes and guilt, he found Peace. Even though he looked out on his Kingdom demolished, he was happy it was over. The end seemed promising. It did seem good for his son and wife.

Bang! Bang! Bang! The man let go of his troubles and fears and became aware of his surroundings. How much did they fall when they yearned to rise?

Bang! Bang! Ba-Crack! The door was broken through and the Zakaz flooded in. The man took one last stare out on his ruined kingdom and took a big deep breath. The man jumped to his death.