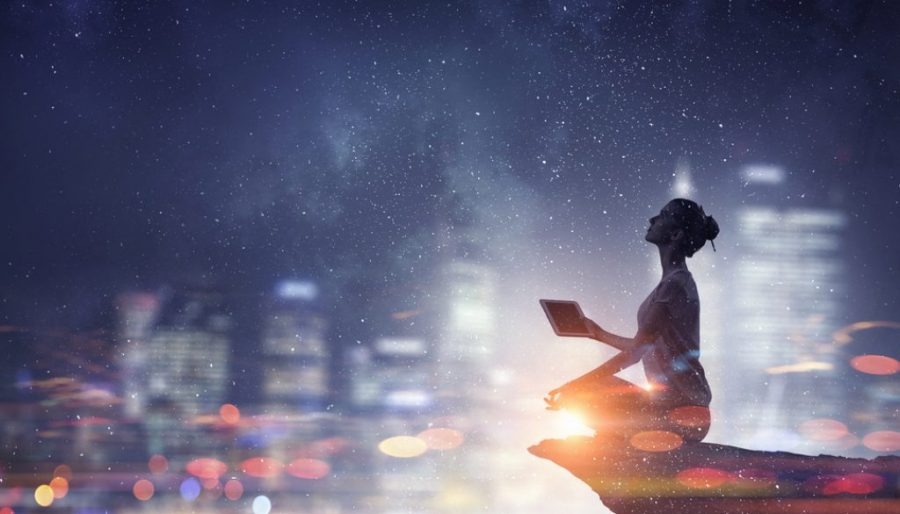 We as humans love rhyme and reason. It is part of our nature to want to find the reasons for something or make them up. This is possible through using scientific inquiry, which provides facts, or through embracing our spirituality and using it to answer life’s big questions. People tend to pit science and spirituality against each other, saying that one is more accurate than the other. However, this is a fight that does not exist in nature. The world begs to be seen through both ways.

Things that are considered more spiritual can be explained through science. Any deep thought or strong emotion we feel comes from our brain and is due to a complex set of nerves firing off and speaking with each other through different chemicals. In fact, everything that makes up who we are, our memories, thoughts, personalities, also come from our brains and can be explained by the same complex set of nerves. Mind over matter is a common idiom that I partly disagree with. It implies that mind and matter are two separate entities, as if mind itself weren’t made up of matter. It’s hard to believe but every feeling we have is just a common way of talking about a set of chemical reactions that take place in our bodies. The human race has given these things names far before we were even scientifically aware of their existence. We use this common language to talk about our feelings and work through them, but they ignore the mechanics of it. And the mechanics are fascinating.

Consider the most beautiful and mysterious emotion known to man: love. We hear about it as children and know that we are loved before we know what it really means. Love is unexplainable; it has no rhyme or reason. Yet it is what drives our lives and influences the choices we make. Love is the subject of countless sonnets, stories, and songs. Its mystery has captured the attention of many a poet since the very first time someone felt their heart race in the presence of another. However, even this enigma is beginning to be explained by science. According to ASDN.net, 5 neurochemicals are responsible for love. The first three, phenylethylamine, norepinephrine, and dopamine, are responsible for first attraction and then falling in love. The next two, oxytocin and serotonin, influence the later stages of long relationships (“Chemistry of Love”). It is these neurochemicals which are responsible for the joyfulness, loss of appetite, and high levels of intimacy you feel with the person you love.

I cannot deny the facts provided by these scientists. But I am sure that anybody who has ever been in love will resent their explanation of that which has turned their lives around. Try telling anybody who has ever felt the whirlwind of emotions caused by love: euphoria, attraction, grief, incredible intimacy, crippling jealousy, that what they are feeling is just a series of complex chemical reactions. Those who learn that love is a set of chemical reactions may feel disillusioned by this information. I was one of those people. I can sympathize with them yet also with those scientists who are only trying to pursue the truth. The problem herein lies in a single word. “Just.” I hate this word, this enabler of closed-mindedness, this perpetrator of one-sided thought. Many a man has been disappointed and limited by that one word. If we could be done with this word, we could spare the human race much grief. How unjust it is. With this one word, you reduce, diminish, belittle. You crush any other ways of thinking, you stifle your imagination. It is an injustice, not to what you are belittling, but to yourself. “Just” is at its best, ignorant and at its worst, plain old lazy. In saying that love is “just” a chemical reaction, you are implying that it’s simple. You are focusing on only the parts and not the whole. By doing this, you are blinding yourself to reality. You are so focused on the details that you cannot see clearly. Yes, love is a chemical reaction, but never just. It is a chemical reaction which sets off other chemical reactions which we interpret as attraction, grief, euphoria, heartache. The science behind the feeling does not diminish what we feel in the slightest. Saying that love is caused by chemicals does not change how much we as humans are affected by it; it enforces it. Even when explained by science, love still retains its sense of magic.

Just like spirituality can be explained with science, science can be given a meaning with spirituality. As I sit in the car, watching the various shades of green and brown hills, this gorgeous landscape, I am reminded of what I learned in my earth science class. The surface of the earth has been shaped over millions of years by wind, water, and sediments. They have slowly chipped away at the earth and as a result, have carved all these beautiful structures we see today. I remember these facts, and I can’t help but be in awe. I can’t help but see these forces of nature as great big hands, sculpting their masterpiece with such careful precision that it should take them millions of years. And still they are never satisfied with their work and continue to sculpt as these structures are always changing. I see science in this way and it fills me with wonder and awe. What good are facts found through scientific inquiry to your soul if not accompanied by a spirit of love which can take them from mere statements and construct them into a beautiful picture of how the world works?

I see everything this way, and it is this way of thinking that leads me to revere the physical world and all the science I have learned in a way that fuels my very soul. I digest the facts and bring it into a spiritual context. I also take a spiritual or emotional concept and try to learn the science behind it. Science and spirituality are not opposing schools of thought, but different languages used to talk about reality. Different languages have different words to explain the same things. Both words are correct and neither word can be more accurate; it only depends on what language you understand better. People are born speaking a certain language and everyone is most comfortable speaking in their native tongue. But I want to be bilingual. I want to be able to speak with two different sets of vocabularies. I want to live in a state of wonder, with a mindset where science and spirituality are merged into one way of thinking, seeing both sides at the same time, blurring the line between the two until they become one. Because the world was never meant to be seen through one way. Perhaps this is why God gave us two eyes. With this mindset, I swear to you, wonders shall never cease.