Jane Austen’s Novels: Why do They Persist? 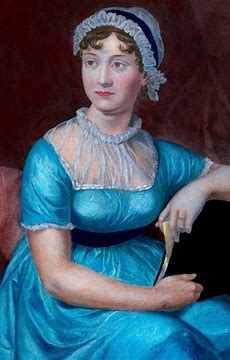 Many are familiar with Jane Austen’s heroines and their adventures. They attend balls and assemblies, go traveling throughout the English countryside, and their lives seem way out of touch from our “modern” society. Why do tenth graders across the country still pick up Pride and Prejudice, or Sense and Sensibility? Why are Miss Austen’s books, all of them written in the Regency Period, being read by both children and adults around the world? Why does Jane Austen’s work live on?

Jane Austen’s work lives out of and beyond her time partly because she captures feelings that everyone has at some point experienced and lays them bare in her books. Jane Austen does this in Pride and Prejudice. The witty Elizabeth Bennet has quarreled with Mr. Darcy, criticizing his conduct and character, humiliating him. Yet later, he proves himself to be an honest, benevolent person. She realizes that she had criticized him without knowing him, her prejudice against him blinding her to the greater reality and has embarrassed herself greatly.  Jane Austen placed this common feeling in her character’s narrative and captured it in a few pages.

Austen also places characters in her stories that are voices of truth and reason. Hence Northanger Abbey. Young, kind, and naïve Catherine Morland has become intimate friends with Elinor and Henry Tilney…as well as Isabella Thorpe and the Thorpe family. Henry Tilney serves as a voice of truth and reason in Northanger Abbey; on various occasions, he seems called upon to provide a moral and a neutralizing statement to balance out the craziness and curiosity of Catherine’s reality. When Isabella betrays Catherine and her brother James, Henry Tilney provides powerful insight into the nature of friendships, and how Catherine must feel. By placing her main characters around other characters who express philosophical, well-thought out ideas and concepts, Austen shares with her readers morals and advice that can be applied to their daily lives – in any age.

The books that were widely popular during the early 1800s were often far beyond being “the stuff of fiction”. Horror novels and mysteries depicting castles in the French countryside and Italian lords with dark pasts and motives haunted the pages of the books that were widely read. Jane Austen was different. Her works were surprisingly regular and human, focusing on the abstract – though realistic – side of life. A study and article completed by the New York Times (“The Word Choices that Explain Why Jane Austen Endures” by Kathleen A. Flynn and Josh Katz) explored the idea that Jane Austen’s word choice was part of why her work lasts, and if literary genius could be measured using data. Flynn and Katz collected 125 British novels – all published through 1710 and 1920 – and using a method of organization known as “principal components analysis” compared them with Jane Austen’s six books. Using a graph, they found that Austen’s writing was far apart from the other novels, meaning that her diction when writing was very different from the other authors of her time. Her word choices were abstract and reflected emotion or time. Jane Austen also used “intensifying words” and contradictory words in clusters. An example of this is how “could” is often combined with “not” and “’must’ tends to be found near ‘to be’ and ‘to have’” (“The Word Choice that Explains Why Jane Austen Endures” by Kathleen A. Flynn and Josh Katz).  To grasp the main idea, Flynn and Katz wrote: “It is at the heart of Austen’s work: What is going on behind the veneer that politeness demands? These distinctive words, word clusters and grammatical constructions highlight her writerly preoccupations: states of mind and feeling, her characters’ unceasing efforts to understand themselves and other people.”

To sum it all up, as an avid Austen reader myself, I wanted to explore the data and evidence of why her work remains an object of interest to readers. All stories that persist are passed through generations of readers: through schools, libraries, and bookstores. They all must have qualities that make readers of any day or age want to keep reading, and through this evolutionary process, this survival of the fittest, emerge the great literary works. Though none can foretell the future, I believe that Jane Austen’s six literary masterpieces will remain on the bookshelves of students, children, and adults of the ages to come, and that her work will touch and enrich the lives of all who enter the stories she creates within her novels. 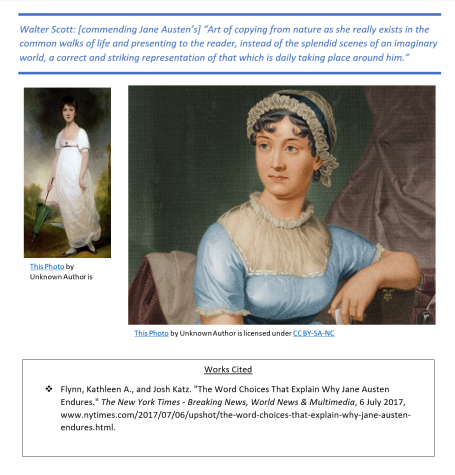