The Notorious RBG – Her Life and Legacy 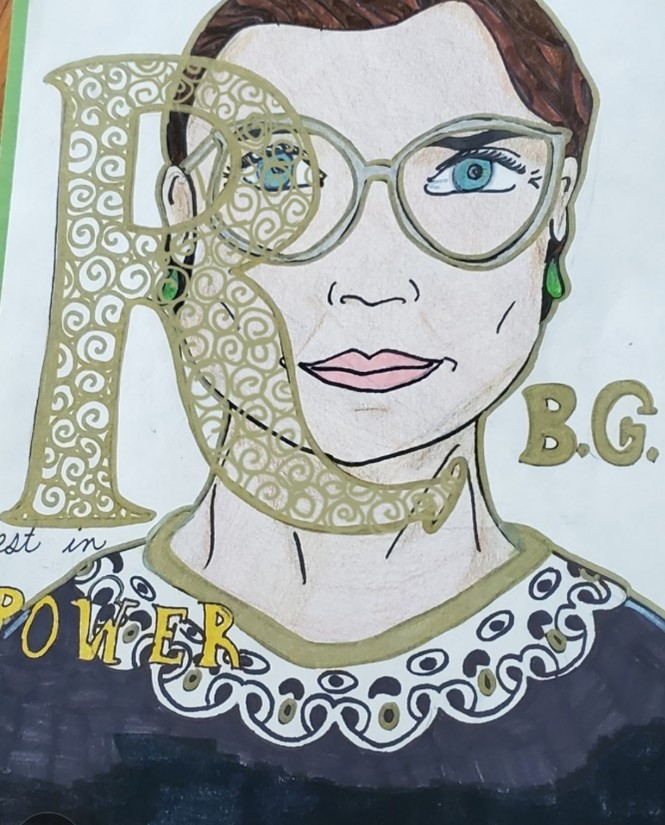 She was a women’s rights icon, and only the second female Supreme Court Justice. Standing at 5’1”, it was in her eighties that Justice Ginsburg took on the new title of ‘The Notorious RBG’ as she became an important figure in pop culture. Feminism was a part of Justice Ginsburg’s life from an early age. Born in 1933, Ruth Joan Bader was the second daughter of Cecelia and Nathan Bader. Ruth Bader worked hard in school and excelled in her studies. Her mother, Cecelia, had worked in a garment factory so her brothers could attend college, and though she never got to go herself, she taught her daughter to value education. After suffering from multiple bouts of cancer during Ruth’s high-school years, Cecelia Bader passed away the day before Ruth Bader’s graduation. Bader attended Cornell University to study law and graduated in 1954. It was at Cornell that she met and married Martin (Marty) Ginsburg, who was also a law student. In that same year, Marty was drafted into the military and Ruth’s first child, Jane, was born soon after. After serving for two years, Marty Ginsburg returned home, and he and Ruth enrolled in Harvard. In 1956, Marty Ginsburg was diagnosed with testicular cancer and Ruth had to navigate her life as a new mother and a law student. While Marty was sick, she took notes for him while continuing her own studies. At Harvard, Ruth Ginsburg excelled academically and was the first female member of the Harvard Law Review and was one of only nine women in a class of five hundred. Following Marty’s recovery and graduation from Harvard Law School, the Ginsburg family moved to New York City where Marty got a job at a law firm, and Ruth enrolled in Columbia Law School. There, Ginsburg was elected to the school’s law review and graduated first of her class in 1959. Despite this, she faced gender discrimination and found it difficult to find work. Ruth Bader Ginsburg became the first female tenured professor at Columbia and throughout the 70’s, she served as the director of the Women’s Rights Project of the American Civil Liberties Union. During this period, Ginsburg argued six cases before the Supreme Court and won five.

President Bill Clinton appointed Ruth Bader Ginsburg to the Supreme Court in 193. That August, she was approved by the Senate in a vote of 96-3. Justice Ginsburg was a fair and honest judge that delivered very intentional statements in the court. She never wasted words; her statements were concise to the very definition of the word. In the later years of her life, she gave increasing numbers of dissents as the Supreme Court became more conservative. Justice Ginsburg was called the Notorious R.B.G., a play on the name of the famous wrapper, the Notorious B.I.G. When asked if she was made uncomfortable by the comparisons drawn between her and a wrapper, Justice Ginsburg would say: “Why should I feel uncomfortable? We have a lot in common. And first and foremost, we were both born and bred in Brooklyn, New York.” From kids dressed up as the Notorious R.B.G. for Halloween and holidays, to people getting tattoos of her likeness, R.B.G. with her given slogan of “I dissent” became a part of American culture, and passed on to the younger generations, through the pop culture character she became, lessons in striving for equality and equal justice under law.

In 2010, Martin Ginsburg passed away from cancer, and was buried in Arlington National Cemetery. Those close to Ruth Bader Ginsburg said that following his death, Justice Ginsburg worked harder than ever and maintained a record of never missing a day on the court from the day she first took the job until her death. Sadly, Justice Ginsburg left the earth on September 18, 2020.

Ginsburg left behind her a legacy to remember; she was the first female member of the Harvard Law Reviews; she and her female colleagues (working as professors in Rutgers) filed an Equal Pay Act complaint and won; she co-wrote the first school casebook on gender discrimination; she fought for the female professors at Columbia to earn the same retirement benefits as their male counterparts; she was the second woman and the first Jewish person to serve on the Supreme Court; and so much more. The Notorious RBG also fought for LGBTQ rights, the rights of disabled people, immigrants, and she fought to expand voting rights. And yet, Justice Ginsburg’s legacy is so much more than court rulings and cases. She was an inspiration to young people and within them, her legacy continues in the good changes they will bring to the world.

You can’t spell TRUTH without RUTH.