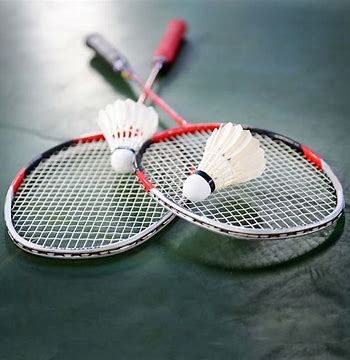 Throughout my several years of schooling, I’ve played a lot of different sports in Physical Education. I’m not a huge fan of extreme contact-based sports, so it would only make sense for badminton to be one of my favorites. I believe it is good for working one’s upper arm strength, and it keeps you moving even if in a smaller range than, for example, football. It’s fun, stimulating, and a safe way to have social interaction at a time like this.

Badminton dates all the way back to ancient Greece, China, and India, but officially got it’s own Federation in 1934. The sport most likely originated from an old game children used to play, Battledore and Shuttlecock, where the birdie was a small cork with bird feathers attached to it. The sport was finally added to the Olympics in 1992.

In Babylon you can play Badminton in gym class, at the tennis courts near the grade school, in your own yard, and of course, at the beach. These are all the areas I’m aware of, but I’m sure there are many other places around one can play it.

The game has a specific set of guidelines. For starters, the umpire and referee regulate the entire game, and make most of the calls. If the birdie lands inside your opponent’s court, you receive a point. If it lands outside the boundaries of their court, you don’t get the point. Hitting the Birdie twice in one turn is prohibited. You can only make one serve in badminton, and unlike in tennis, it must travel upwards first. While these are the basics, there is also an entire handbook of more badminton rules.

Just to be safe, there are some precautions taken in badminton as well. One should make sure the racket is near the upper portion of their body for protection. If playing in a 2v2 game, never turn to watch your teammates shot, since there’s a higher risk of the birdie or racket hitting your face. Finally, players should remove any potential obstructions in the court, for example: gravel, loose stones, litter, etc. (some of these items do not apply if the game is played at a beach)

Although it hasn’t had many ground-breaking effects culturally, Badminton is still a sport played worldwide, positively affecting many cultures it inhabits. For awhile it was the second most popular sport in the world, and still makes the top 10 today. Considering tennis came in 1873, a long time after badmintons creation, one could infer that badminton led the way for sports like tennis to come into fruition.

My family and I have both a large front and backyard, so on a sunny day we could always pick up some equipment and go hit a birdie back and forth. Daily might be difficult, but that doesn’t mean we can’t get creative with it. If we want to walk up into town we could stop by the courts and play it, or if we want to go to a beach we can bring the items to play it. These were all places previously stated, but I haven’t yet played badminton at these locations, so now I can begin incorporating it into my lifestyle more.

Depending on how much one can move their joints as they get older, badminton can in fact be a lifetime sport. It doesn’t require extreme strength or much running, plus unlike tennis the object one must hit is extremely light. Some aspects of it are a little physically demanding, but a short game wouldn’t hurt.

Overall, Badminton is simple sport to play with friends outdoors (or in a gymnasium). It’s been played around the world for generations and I don’t see it going away anytime soon. Hopefully, some insight has been shined on the topic, and you too are interested in the game.