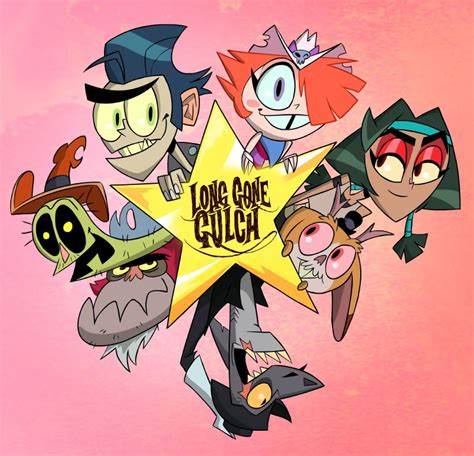 Animation is a medium that has drastically changed over its history. Not only in style, but also in format. Decades ago, most cartoons were hand drawn and colored in ink, whereas today the process is all digital. Both methods of animating have their ups and downs; but has anybody ever tried using them together? Well, to my surprise, many people have tried combining both methods. One of these hand drawn/digital projects has always stood out to me: the 20-minute-long animated pilot Long Gone Gulch, directed by Tara Billinger and Zach Bellissimo. I’ve been following its development process for around a whole 2 years now, and since the full episode was just recently released, I plan to discuss and critique it.

Before I summarize the plot of this cartoon, I should mention that the pilot prominently features comedy and action, with other elements sprinkled in. Long Gone Gulch is set in an old western town, our main characters being “Snag” and “Rawhide” who are the sheriffs. The episode kicks off with a fight scene between the protagonists and the main villain featured in the episode, “Mako.” In this scene we learn Rawhide’s father was the previous sheriff, and that he has passed away. After a bit, Mako is defeated and thrown in prison, which the two sheriffs go on to notify the mayor about. Instead of congratulating them on their victory, the mayor patronizes them for being irresponsible and destructive and threatens to take away their badges. The two head over to a saloon where we meet Rawhide’s rival “B.W.” who claims that the two won’t be sheriffs for much longer due to the town being hardcore. In an act of frustration, Rawhide throws something at B.W. which sets off what appears to be some evil possessive spirits. Chaos ensues as the spirits possess both Rawhide and B.W. causing them to destructively fight each other. The mayor shows up to the saloon to figure out where all this ruckus was coming from and gets caught up in the chaos himself. This was the last straw for him, so he decides to take away Snag and Rawhide’s badges plus their room in the town hall. Snag and Rawhide part ways to go find a new place to sleep for the night. In the morning, Snag returns to the town hall to pick up something he left behind, only to find that Mako escaped prison and captured the mayor while there were no sheriffs. Mako captures Snag along with the mayor, and it’s up to Rawhide to save them. Rawhide barges into town hall and successfully frees Snag and the mayor, only to go onto the rooftop to stop Mako in a cartoonish “stare-off.” Mako is defeated once again and then after a few more antics the mayor gives the two back their positions as sheriffs.

To start off, here are some pros of the episode. Of course, the aspect that stands out when first watching it is the incredible artwork. Its clear they spent those two years of production perfecting the lighting, character design, and animation fluidity. This is one of the benefits of developing a cartoon with hand-drawn techniques, it leaves room for extensive stylization. The humor is decent but elevated by great comedic timing, and the action scenes were well choreographed. Most characters are memorable and have understandable morals (aside from the villain but I’ll let it slide since he’s extremely memorable and hilarious). The production quality for the pilot is quite high considering it’s a free to watch video on YouTube, it wouldn’t look out of place on television.

Now as for the cons, this is just nit-picking for the most part. Towards the beginning the audio timing is a bit off leading to some unnatural exchanges of dialogue and transitions. The first mention of Rawhide’s father being the previous sheriff wasn’t implemented seamlessly, it was a random statement made by the villain in the middle of a fight. Luckily two mentions of it later make up for it. I don’t really understand the implementation of spirits during the saloon fighting scene either, they possess Rawhide and B.W. only to immediately de-possess them after the mayor gets affected by the chaos. Speaking of B.W., while she did contribute to a few things in the episode, I feel like she could’ve been utilized more than she was. For the most part she only taunts Rawhide and doesn’t move the plot forward, but one could argue she causes the main conflict of the pilot by initiating that saloon fight, so it’s not my biggest complaint.

Overall, I say this pilot episode was worth the wait and well worth a watch. What really stood out to me about it is just how it barely even feels like a pilot, you can understand it’s universe right away and be entertained throughout the whole viewing. Hopefully it’ll be developed into a full series sometime in the future and we’ll see if it can top itself in episode quality.