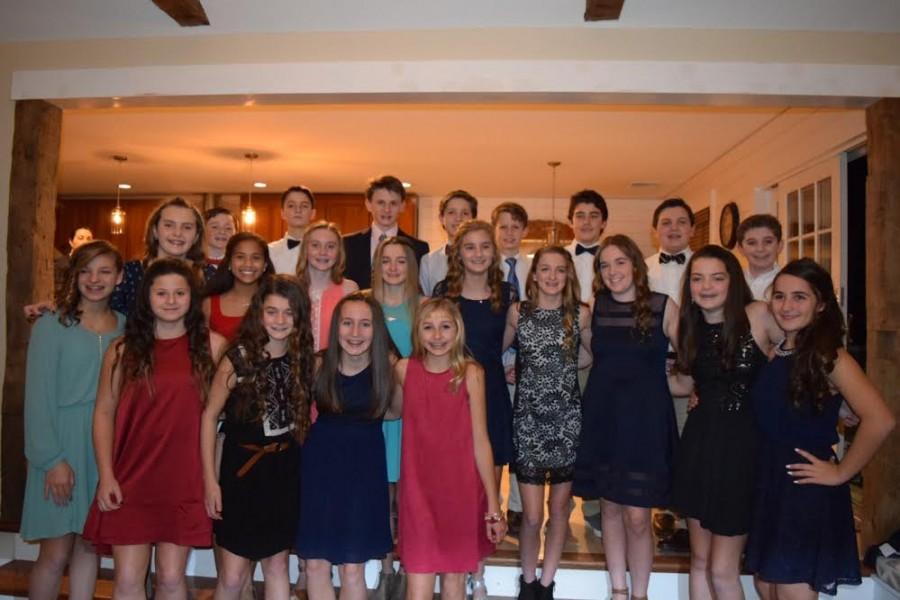 The junior-high students are ready for their dance!

The stars lighting up in the night sky is one of the best views you will ever see. Those hints of lights shining in the midst of the black sky. This is what the gym looked like except, it was kinda obvious that there were lights hanging everywhere not stars. The boring, old-smelling gym had been transformed into beauty by just simply hanging lights. Something so small like that makes a huge difference.

I snap out of my illusion as my friends drag me to the dance floor. The dance floor was empty and I was certainly not going to be the only person dancing there. Obviously dancing is a vital part of a dance but for me it is the most awkward thing to get into. I would rather not have everyone stare at me while I dance, so I shake my hand away and walk to the doors. By now everyone was arriving, girls with the hair and makeup done and boys wearing fancy tuxedos. As I saw some of my friends walk in, I hugged them and admired how beautiful they looked. People began rushing to the dance floor whipping out some crazy moves. I still wasn’t sure about dancing but I only had two hours to have the time of my life. I walked through the crazy herds of people until I saw my friends huddled in a corner. Dancing my way into their little circle, I began singing and jumping to the song and the next song, and next one and next one.

All of a sudden a noise like a boom in a thunderstorm approached. A huge circle had formed in the center with people cheering a name. As I got closer I realized that there was a dance battle going on. I laughed when I saw someone on the floor spinning in circles. Kids these days, huh? I began to jump and scream for the person that was a way better dancer. Even as the circle began to disperse the crowd still roared with happiness. I was laughing, singing, dancing not even realizing what was going on around me. There was a sudden loud scream, “ Conga line!” Everyone joined in the huge line that was going around the gym. My heart was racing and sweat beaded down my forehead. I was having so much fun I never wanted it to end. Just then a slow tempo started to play and everyone went to find a partner. I grabbed my best friend and we just swayed back and forth adding a dip or turn every now and then. The slow song transitioned into a fast one and when I glanced down at my phone I realized it was 9. The dance was soon ending, I mean nothing lasts forever. As I grabbed my bag and headed out I was just replaying the night’s events in my mind. The dance was a blast and I enjoyed every second that I was there!