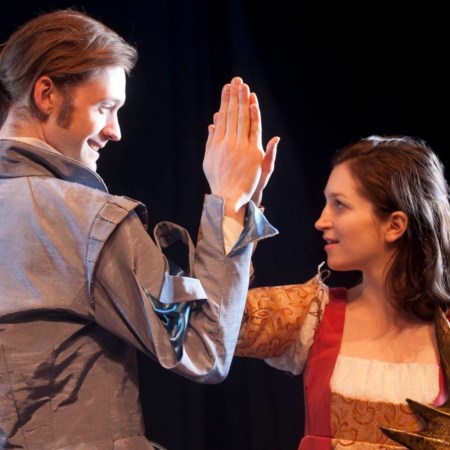 On February 14th all ninth graders at BHS went to see the famous Shakespeare play, Romeo and Juliet at the Westhampton Beach Performing Arts Center. This was thanks to a special performance through the Northeast Regional Tour of Shakespeare by Shakespeare & Company. Although going to a Shakespearean play is not something that would be the first thing on a kid’s mind when they have spare time, it was definitely a pleasant surprise and worth the bus ride.

First, the actors were phenomenal. During the play, surprisingly, there was no intermission. So the actors went through the entire play non-stop (the play was long and took the majority of the day). That takes skill and endurance. This is excluding the fact that there were only seven actors in total playing about three roles each, doing lots of costume changes in between scenes. These are only a few examples to show how much hard work the actors put into the play.

The play was also very traditional with the occasional modern twist. For example, instead of an actor each having an individual role, seven actors had multiple parts like the plays in Shakespeare’s time. Using costumes and an occasional mask to tell who was who, as well as using dialogue so the audience wouldn’t get too confused. Also, gender-bending was involved like in older plays (when female actresses were illegal), the modern twist being that instead it was a female actress playing male roles instead.

Seeing the play being acted out traditionally helped squash out some stereotypes I didn’t even know I had about Shakespeare’s plays. Like he apparently had a sense of humor, even though this play was more of a tragedy than a romantic-comedy (spoilers?).

Or how it was just as offensive to bite your thumb at a person as it is to give someone the finger. (I’ll admit, it’s not exactly school appropriate to mention this, but this play has murder and suicide involved, as well as Juliet being married off at thirteen. My opinion might not mean much but this is an opinion piece. And I think that’s much worse).

Romeo and Juliet being played traditionally also reminded me of the importance the play has then and now. Like how the play still forces us to ponder about sensitive subjects that might have been waved off before due to discomfort, or it would’ve been a social taboo otherwise.

In the play one could argue that it romanticizes suicide. And they’re not wrong. But the times of when the play was first written vs. today are two very different stories. Back then, social ties and classes revolved a person’s entire life. And unlike today, it’s not about the individual, it’s about the community; it’s about you helping the family.

If the family benefited from the arranged marriage, then you go through it without complaints. Back then, the only real way out was through death. You couldn’t just move somewhere else, because people would ask questions like what family you came from and what kind of status you have. Sure, you could lie. But if you got caught? If you slipped, even once? As the kids say today, you were royally screwed. Say hello to the guillotine and the gallows.

Suicide was also seen as a one way ticket to Hell. Part of the reason why Romeo and Juliet was seen as romantic was because they would rather spend an eternity of damnation together rather than spending a lifetime apart.

In retrospect, many people would look at this and say that Romeo and Juliet’s romance was a stupid decision from the start, focusing on how they should have gone their separate ways and lived their lives instead of choosing to end their lives. Other people might remember the play and say this was all Tybalt’s fault that it wouldn’t have had snowballed to Romeo and Juliet committing suicide if he didn’t kill Mercutio, Romeo’s friend.

But maybe Romeo and Juliet’s impulsive decisions weren’t so stupid as people think. And perhaps Tybalt was just the straw that broke the camel’s back.

Sure, Romeo and Juliet would’ve lived their lives if they chose duty over love. But in the end, wouldn’t the feud still continue? Wouldn’t hate just have added to more hate until there was nothing left of the two families, or someone else took Romeo and Juliet’s place? Looking at it through the big picture, wouldn’t this war have come to an end one way or another?

Back then, it was also believed one would have been condemned to damnation if they disobeyed their mother and father or if they did something selfishly that didn’t benefit the family. But by Romeo and Juliet disobeying their parents, didn’t they benefit their families by ending the feud and stopping the bloodshed between them? Indirectly or not?

Perhaps Shakespeare’s true message was that things aren’t as black and white as they seem, but just green in between.

And yes, I do mean green – that a situation can be more than a mixture of two scenarios and thought processes. Green in a black and white world is so jarring and complex that you have to take note of it to see the world around yourself. The night is black, the day is white, and the lush meadows are green.

Another message of the play is not that love conquers all, but it takes love to end hate. That justice and revenge can only go so far, and in the end your hands turn into an ugly shade of red, and you just become more bloodthirsty than before.

Maybe I’m preaching too much. Perhaps I’m wrong. Maybe I’m too young to question such things. But that doesn’t matter in the end.  Because in the end, this is just an opinion piece and both Romeo and Juliet are dead.