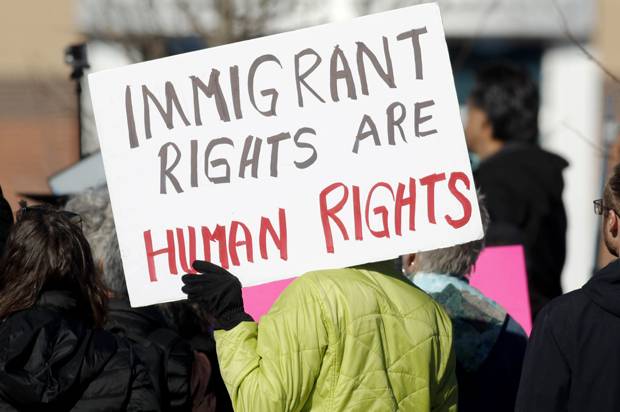 Immigrants have been coming to America ever since its creation, looking for a new start in this land of opportunity. Those who are here illegally live in constant fear of having their lives torn apart. And now, there is even more fear. During the Obama administration, the ICE (Immigration and Customs Enforcement) put more focus on deporting illegal immigrants who had committed serious crimes. But now, Trump’s immigration plan encourages enforcement officers to arrest anyone who is here illegally. These immigrants are fathers and mothers who have their families to worry about. They are people who just want better lives. And now with all these recent deportations of immigrants without criminal records, the lives they have been building here are being destroyed.

During the Obama administration, recent arrivals, repeat immigration violators and people with multiple criminal violations were priorities to be deported. Trump’s policy broadens the groups of illegal immigrants that are priorities and gives more authority to enforcement officers, allowing them to apprehend anyone that they think is in violation of immigration laws. According to USA Today, during a raid in June 2016 in 6 Midwestern states, 85% of people arrested had been convicted of crimes, while during a raid this February in the same states, only 69% had a criminal record. The other 31% were people encountered during the targeted enforcement operations that were found to be in violation of federal immigration laws. Gone are the days when illegal immigrants were safe if they didn’t commit crimes, now it is possible that they could be deported at any time just for being here illegally.

Why is Trump’s policy harsher; how does he, and those who think like him, justify these deportations? Let’s listen to him. “I do business with the Mexican people, but you have people coming through the border that are from all over. And they’re bad. They’re really bad. You have people coming in, and I’m not just saying Mexicans, I’m talking about people that are from all over that are killers and rapists and they’re coming into this country.” In Trump’s eyes, illegal immigrants are not just bad, they’re really bad. Let’s think rationally about this. How can you label an entire group of people as criminals? Recently, Trump created the VOICE (Victims of Immigration Crime Engagement) agency to serve American victims of illegal immigrants. In his address to congress, he spoke about Jamiel Shaw Jr, who was murdered by a gang member who was living here illegally. This murder is tragic, as are the other cases of murder that have been committed by native born citizens. Trump chooses to point out this case in an effort to paint all illegal immigrants in this villainous light and to support his increased enforcement of immigration laws. This one gang member does not represent all illegal immigrants. The actions of a few people do not represent those of the whole group. Don’t listen to the cruel generalization, listen to the facts. According to the Cato Institute, illegal immigrants are 44% less likely to be incarcerated than natives. Illegal immigrants are not the criminals they are made out to be.

Although not all illegal immigrants are criminals, they still have disobeyed the law in one way; they are here illegally. In a perfect world, they wouldn’t have to do this. In a perfect world, immigrants would be welcomed with open arms into this nation that was founded by immigrants, and all would have the opportunity to create a new life in this great nation. Sadly, we do not live in a perfect world. People who wish to come to America generally have three ways to do so: through employment, family ties, or when seeking protection. Those trying to come through employment must have a high level of education, professional experience, and an employer who is willing to sponsor them. And although visas are always available for minor children, spouses, and parents of U.S citizens, visas for all other family ties are limited. Those who come for protection must prove that they feel unsafe in their country and be screened by multiple U.S and international agencies, and the number of visas given out are limited. There is a certain number of visas that can be given out for different reasons every year, and there are not enough for all the people who want to come. According to travel.state.gov, more than 4 million people are on the waiting list for visas. Getting it may take them years.

People come to America for all different reasons. They might feel unsafe where they are living,  or maybe they want a better education, or better opportunities for their children. All these people have one thing in common, they are seeking a better quality of life. They leave behind everything they’ve known in search of opportunity. And when they get here, they find jobs and support their families. They are in no way hurting our country. In fact, studies show they even help our economy. According to American Progress.org, immigrants added $1.6 trillion to the total U.S gross domestic product in 2013. Immigrants come to build new lives, and end up helping to build our economy. Yet they are still considered criminals and bad influences on our society.

Our priorities for deportation should be illegal immigrants who have multiple criminal violations, not those whose only crime is to be here illegally. The only reason they had to commit this crime is because it is so difficult to come here legally. They have been building their lives from scratch, pursuing education and job opportunities that this nation provides, and because of recent enforcement of immigration laws, are now living in constant fear of having their lives torn apart. You can stand with these people by not listening to those who try to convince you that they are criminals. Speak out against the unjust policies that allow good people to be ripped away from the lives they have worked so hard to create here, in this supposed land of opportunity.